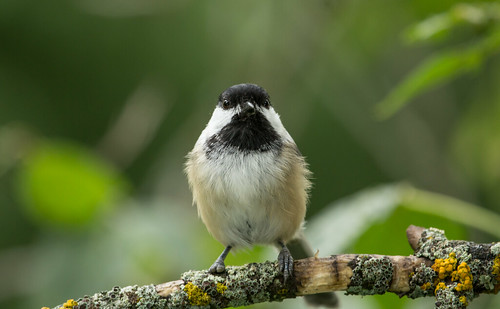 I’m back to posting my usual blog posts at lauraerickson.blogspot.com. Ever since my conservation big year ended, I’ve been eager for the chance to enjoy the birds in my own backyard again. But 2014 is the wrong year for that—never before have Russ and I had as few birds as we’re seeing now. This winter we’ve had the fewest birds ever on Peabody Street.

Every year, Ron Pittaway, an Ontario-based ornithologist, puts together a winter finch forecast based on a wide variety of variables. This year, he predicted that there wouldn’t be much movement of finches from Canada because seeds are so abundant up there. Spruce cone production has been huge up there, so he didn’t anticipate redpolls or siskins needing to move south much. Mountain ash berry crops are so abundant this year that Pine Grosbeaks aren’t expected to head our way, either. Pittaway notes that Evening Grosbeak numbers overall should be on the upswing as spruce budwork outbreaks are increasing—these birds have the highest reproduction success when they can feed their nestlings spruce budworm larvae—but extensive pesticide spraying to control the outbreak will greatly limit this food source. The birds may not be affected directly by the pesticides, assuming Canadian forest managers are mostly using Bt or toxins that specifically target invertebrates, though some insecticides affect neurological processes found in all animals. In this particular situation, the effect of the pesticides on Evening Grosbeaks is mostly secondary, wiping out their primary nesting food source. This is probably the primary factor that led to the decline of this beloved species. Even though we weren’t expecting many finches this year, it is troubling that there are so few. With irruptive species, one expects numbers to be boom or bust, but in previous decades the numbers at both ends of the spectrum were higher. Back when I always had dozens and sometimes hundreds of Evening Grosbeaks in my yard throughout fall, winter, and spring, even on slow days there were always a few. And even during poor winters, I could count on some redpolls showing up by now. This year was the first time in 22 years that not a single redpoll was counted on Duluth’s Christmas Bird Count—sadly, there were no Evening Grosbeaks either, but that situation has become the norm now.

It’s harsh enough to not be seeing winter finches, but in my own neighborhood other birds are being found in lower numbers than I can ever remember. I have one pair each of Hairy and Downy Woodpeckers, and one pair of White-breasted Nuthatches, but none of them are spending much time in my yard. And chickadee numbers are way down—and they were down well before that extreme cold spell. Most of the time now when I look out the windows, I don’t see a single bird, and the only chickadee flock that does appear—not always even once a day—has only three or possibly four member chickadees. We may have lost them to West Nile Virus or something similar–chickadees in particular are exceptionally vulnerable to this disease.

I’ve been noticing a slow but steady decline in the birds in my neighborhood for over two decades now. At first, people blew me off saying birds were just fine at their place in the woods, or that this was mere anecdotal information, and now most of us are resigned to low numbers as the new norm. But little by little we’ve been sacrificing the wild elements that made our quality of life so rich. The saddest thing is that the people we elect to positions with some control over policies that affect bird numbers never seem to have a clue about nature or how very much we’ve already lost. I hope we start getting more focused on environmental issues again before it’s too late.